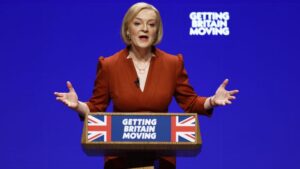 Britain’s new finance minister announced a comprehensive retreat on the UK government’s tax-and-spending plans on Monday in a frantic effort to calm jittery markets and restore the government’s credibility.

Just four days into the job, Jeremy Hunt said he would reverse “almost all” tax measures announced three weeks ago by his predecessor. The stunning reversal would raise £32 billion ($36 billion), he said.

A proposed cut to the basic rate of income tax from April 2023 has been postponed “indefinitely.” And while the government has said it will still guarantee energy prices for households and businesses through this winter, it won’t commit to capping prices beyond next spring.

“No government can control markets, but every government can give certainty about the sustainability of public finances,” Hunt said. “The United Kingdom will always pay its way.”

The moves amount to a gutting of Prime Minister Liz Truss’ flagship “growth plan” and leave her in a perilous political position.

The opposition Labour Party said Hunt’s statement highlighted how the government has made life harder for everyday people, as mortgage rates and other borrowing costs have spiked in recent weeks.

“All the Chancellor’s statement underlines is that the damage has been done,” lawmaker Rachel Reeves tweeted.
Investors show support

The announcement helped ease alarm in financial markets on Monday. UK government bonds rallied and the pound climbed 1.2% to $1.13. Yields on 30-year UK bonds, which move opposite prices, dropped to 4.37% after rising above 5% last week. Ten-year borrowing costs fell below 4%.

Investors still remain on edge, however. While Hunt’s policy announcement could deliver a short term “relief rally,” significant volatility is likely to persist, said Francesco Pesole, a strategist at ING.

On Friday, Truss fired Kwasi Kwarteng, her previous finance minister, and reinstated a big tax hike on corporations. But those moves failed to satisfy investors worried about the state of government finances.

Truss faces serious questions about whether she can hold on to her job after financial markets rejected her controversial economic package, which aimed to boost growth by slashing taxes and ramping up borrowing.

Her government has come under huge pressure from investors and other Conservative Party members since the effort was unveiled in late September. While Truss has walked back many of the measures, including a plan to cut the income tax rate for top earners, it’s failed to revive confidence.

Over the weekend, US President Joe Biden said he thought Truss’ trickle-down economic plan “was a mistake.”

“I disagree with the policy,” he said, adding that it was “up to Great Britain to make that judgment.”

The Treasury said that Hunt met with the governor of the Bank of England and the head of the Debt Management Office on Sunday night to brief them on his plans. He’ll share more information with Parliament later Monday.

Plans that have already started working their way through Parliament, including a cut to a tax on house purchases, will go ahead.

But the government will keep the basic rate of income tax at 20% “until economic conditions allow for it to be cut,” saving £6 billion a year. Other tax-cutting measures, such as slashing dividend taxes and the introduction of a new VAT-free shopping program for non-British visitors to the United Kingdom, have also been ditched.

“A central responsibility for any government is to do what’s necessary for economic stability,” Hunt said.
The energy question

The Treasury will lead a review to examine how to ease the pain of high energy costs beyond April 2023, though its guarantees will remain in place over the next six months.

The government said in September that the typical UK household would pay no more than £2,500 ($2,825) annually for their energy for the next two years.

“Looking beyond April, the Prime Minister and the Chancellor have agreed that it would be irresponsible for the government to continue exposing the public finances to unlimited volatility in international gas prices,” the Treasury said in a statement.

Paul Johnson, director of the Institute for Fiscal Studies think tank, tweeted that the review of how to support energy bills past April was “long overdue.”

“It was always wrong to promise an untargeted, universal, massively expensive subsidy for two years,” he said. “It may have been the only option in the short run, but worth spending a huge amount to improve it longer term.”

But campaigners worried that people won’t be able to afford their heating bills were more critical, highlighting the difficult decisions faced by policymakers.

“The country was already facing a financial cliff edge in April due to plans to end other support packages,” Simon Francis, coordinator of the End Fuel Poverty Coalition, a group of civil society organizations, said in a statement. “This cliff edge has now become even steeper.”

The finance minister’s full medium-term budget will still be delivered on October 31, together with a review of the government’s growth and spending plans by the UK’s fiscal watchdog, the Office for Budget Responsibility.

Investors are closely watching the bond market Monday after the Bank of England on Friday ended its £65 billion emergency purchase program, which was intended to temporarily help pension funds hit hard by the market tumult.

While the central bank ultimately bought under £20 billion in government debt, the intervention — announced on September 28 — helped provide some reassurance as the bond market churned.

The Bank of England said Monday that the operations “enabled a significant increase in the resilience of the sector.”