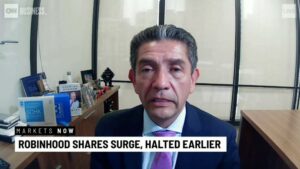 It’s been a tumultuous year for retail traders — people who buy shares of individual companies or indexes on popular trading platforms like Robinhood or E-Trade. Facing an economic outlook full of bear markets, high inflation and interest rate hikes, they’ve finally decided that they’ve had enough.

What’s happening: Back in the spring of 2020, the world shut down because of Covid-19, and markets plummeted. But Americans, bored and stuck on their couches, turned to stocks as a source of entertainment. Using the stimulus money lining their pockets and taking advantage of new technology that made it easy and cheap to trade, they entered the markets. This new cash led to a quick stock rebound as well as the rise of meme stocks.

Daily average trades at companies like TD Ameritrade (AMTD) and Charles Schwab (SCHW) spiked to new highs in March 2020 and again in January 2021 and February 2021.

That’s no longer the case. The market downturn this year has knocked about $15 trillion off the valuations of publicly traded companies, and retail investors, once eager to buy the dip and save fledgling markets, are fleeing.

Order flow data from Robinhood and Interactive Brokers also show steep declines in activity over the past three months. In Februrary 2021, Interactive Brokers registered an average of 3.7 million daily retail trades. By September 2022, that number declined to 1.9 million, according to data collected by S&P Global Indices.

Recent search trends on Google also show a drop in interest in the stock market. Market-related searches reached their high in March of 2020 and remained high through 2021. But searches for terms related to the Dow Jones Industrial Average, Apple (AAPL) and Tesla (TSLA) have fallen in recent days. Those declines are a good proxy for actual market participation, said DataTrek Research in a report.

In general, individual investors are feeling bearish. The Investor Movement Index (IMX), created by TD Ameritrade to indicate the sentiment of retail investors, fell by 7.26% during the September period. The IMX sat above 8.0 in 2021, today it’s at just 4.5%.

Robinhood (HOOD), the app-based stock trading platform, has been cutting costs in response to a declining user base. The company announced in August that it would cut 23% of its full-time staff, the second cut this year.

“Last year, we staffed many of our operations functions under the assumption that the heightened retail engagement we had been seeing with the stock and crypto markets in the Covid era would persist into 2022,” Robinhood CEO Vlad Tenev wrote in a message to employees following the announcement. “In this new environment, we are operating with more staffing than appropriate.”

Shares of Charles Schwab have dropped by about 20% so far this year. Robinhood is down 47%, and Morgan Stanley is down 24%.

The bottom line: A loss of retailer investors is concerning for many reasons. One is that it could spell a longer, deeper market downturn. It also could mean that the heyday is over for meme stock fan favorites like AMC (AMC), GameStop (GME) and Bed Bath & Beyond (BBBY).

But don’t panic yet. “While activity is certainly a far cry from the meme stock rally, I’d say it’s holding up fairly well,” said Thomas Mason, senior analyst at S&P Global Market Intelligence. “Some are undoubtedly pulling out of the market and buying bonds, but it seems like retail investors are mostly taking a wait-and-see approach to equities, holding onto Big Tech stocks and rotating into more stable, dividend-paying sectors like energy.”
Goodbye Liz Truss, we hardly knew you

A revolt among members of Truss’ Conservative Party sealed her fate as the shortest-serving prime minister in Britain’s history on Thursday, reports my colleague Julia Horowitz.

But the failure of her fleeting leadership was really written by financial markets. Investors immediately protested her disastrous “growth plan” when it was revealed in September.

Need more proof? Markets usually hate uncertainty. But on Thursday, they shrugged. UK bonds held their ground. The pound ticked up 0.4% to $1.125.

“Although the resignation of Liz Truss as Prime Minister leaves the UK without a leader when it faces huge economic, fiscal and financial market challenges, the markets appear to be relieved,” said Paul Dales, chief UK economist at Capital Economics.

Another Conservative leadership election is due to take place within a week, with the next prime minister expected to be announced on Friday, October 28. The UK will now see its fifth premier since the divisive 2016 Brexit referendum.
US home sales fall for the 8th month in a row

Home sales in the US declined for the eighth month in a row in September as surging mortgage rates and high prices pushed buyers out of the market, reports my colleague Anna Bahney.

That continues a slowing trend that began in February and marks the longest housing sales slump since October 2007 during the subprime mortgage collapse.

Sales of existing homes – which include single-family homes, townhomes, condominiums and co-ops – were down 23.8% in September from a year ago and down 1.5% from August, according to the National Association of Realtors.

Sales in September were at their weakest level since May 2020, which was an anomaly because that was in the early days of the pandemic lockdown. Setting that aside, sales last month were the weakest they have been since September 2012.

A fragmented market: The slowdown is manifesting differently in markets across the country.

“While we often talk about a national housing market, this is really the sum of trends in tens of thousands of local real estate markets across the country,” said Danielle Hale, chief economist at Realtor.com. “As the national market is at an inflection point, the range of local market conditions has grown wider.”