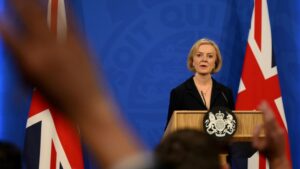 The decision by Jeremy Hunt, the new UK finance minister, to jettison the bulk of Prime Minister Liz Truss’ much-maligned plans to boost growth has come as a huge relief to investors, easing their worries about the sustainability of government finances.

But even if “Trussonomics” has been tossed out and a total market meltdown avoided, the near-term prospects for Britain’s economy look increasingly wobbly.

A recession stretching through the winter looms. Policymakers were facing tough choices even before Truss unleashed financial market chaos. Now, with the government’s credibility tarnished, they’re in an even worse predicament.

“The last month has been like a bad dream, but the situation prior to the last month was not a good dream,” said James Athey, investment director at Abrdn, an asset manager.

The sudden reversal of almost all tax cuts announced just three weeks ago could put financial markets on more stable footing. If borrowing costs had continued to climb, it would have made life harder for millions of households and businesses.
Period residential homes in a south London street, on 6th October 2022, in London, England. (Photo by Richard Baker / In Pictures via Getty Images)

Are you a UK mortgage borrower hit hard by rising interest rates? Tell us your story

The British pound rose as high as $1.14 on Monday, though it dropped below $1.13 on Wednesday. Yields on 30-year UK government bonds, which move opposite prices, have dipped to 4.24% after topping 5% last week.

But concerns about the economy are resurfacing in lieu of angst about the country’s financial markets — though on that front, too, uncertainty remains.

Citing a renewed commitment to controlling the country’s debts, Hunt has said the government will universally cap energy prices only until April. Support beyond then will cost taxpayers “significantly less than planned” and be targeted at those most in need, he said. A fresh spike in energy bills could boost inflation again in the spring.

The government’s ability to ease rising living costs will be limited by its attempts to rein in borrowing and concerns that additional stimulus measures will fan inflation further.

Meanwhile, the Bank of England is expected to keep aggressively hiking interest rates, and the pound is likely to drift downward again as foreign investors favor the safe-haven dollar, hurting businesses that import goods.

Goldman Sachs recently downgraded its economic outlook for the United Kingdom, forecasting “a more significant recession” in which activity contracts by 1% in 2023. It said it sees “additional downside risks to growth” following Hunt’s announcements on Monday.
U-turns and their consequences

The original set of economic plans unveiled by Truss and her previous finance minister, Kwasi Kwarteng, were a controversial bid to reignite a British economy that’s still below its pre-pandemic size. Output shrank by 0.3% in August, while inflation stood at 9.9%, according to the Office for National Statistics. It rose to 10.1% in September, once again touching a 40-year high.

But the gamble by Truss to jumpstart growth — predicated on a huge package of tax cuts that required substantial borrowing — was an epic failure. On Monday, Truss apologized “for the mistakes that have been made” in an interview with the BBC.
Jeremy Hunt leaves 10 Downing Street in London after he was appointed Chancellor of the Exchequer following the resignation of Kwasi Kwarteng. Picture date: Friday October 14, 2022. (Photo by Victoria Jones/PA Images via Getty Images)

Economists are now racing to figure out what Hunt’s reset means for their forecasts. His decision to ditch most tax cuts and to place a time limit on the government’s energy support has muddied the picture for the next year, even as it’s temporarily placated bond traders.

Inflation could rise again in April if support is rolled back and some households see their bills jump. Goldman Sachs warned that inflation could leap to 11.9% year-over-year in April from its current forecast of 7.1% and “stay higher throughout 2023,” depending on what the government decides to do.

“The Chancellor has created some level of stability in the markets, but has created total instability in people’s households,” said Simon Francis, coordinator of the End Fuel Poverty Coalition, a group of civil society organizations.

Cuts to public spending, the so-called “austerity” that defined the UK’s policy approach in the aftermath of the 2008 financial crisis, would be politically unpopular and hurt vulnerable sections of society. But Hunt indicated that “very difficult decisions” lie ahead given the need to control public debt loads.

While the finance minister’s changes this week will save the government £32 billion ($36 billion), analysts say the government needs to do more to ensure public finances are on the right track. That will leave little room to spend on economic stimulus programs, weighing on near-term growth.

“If you’ve got a spending squeeze and no ability to stimulate with fiscal easing, then the economy is going to struggle to recover from what we think will be a recession this winter,” said Dean Turner, an economist at UBS Wealth Management.
The fallout continues

At the same time, the Bank of England intends to stay tough on inflation. Governor Andrew Bailey emphasized over the weekend that a “stronger response” may be needed to get a handle on price rises. The central bank also said Tuesday that sales of government bonds bought during the pandemic era will begin on November 1.

That could push up bond yields at a moment when they’re still fragile. A premium from the recent chaos is still built into UK borrowing costs, making it more expensive for households and businesses to take out loans.

The yield on benchmark 10-year UK government bonds has dropped back below its US counterpart. But it remains near 4%, up from 3.5% before Kwarteng unveiled the government’s initial “growth plan” (also known as the “mini-budget”) in September.

“It’s too early to say this ‘mini-budget’ premium is here for the long term, but it’s certainly expected to be here for a little while,” Turner said.

The specter of additional volatility in financial markets still lingers. Hunt’s detailed budget, which will be accompanied by an assessment from the country’s fiscal watchdog, will face huge scrutiny later this month.

And restoring investor confidence in UK assets is expected to be an effort that takes time — especially as questions about Truss’ political future swirl. If she is ousted, that would introduce more doubt about the government’s policy path.

“It takes a while for them to feel comfortable again,” Athey of Abrdn said.

Should financiers continue to shun the United Kingdom, put off by the gloomy growth outlook and questions about the government’s credibility, the pound will continue to weaken. That will make it more expensive for businesses to import the goods they need, fanning inflation and further weighing on economic activity.

Athey’s prediction? Even if the currency isn’t swinging sharply, it will face “steady depreciating pressure” in the coming months.